As part of our citizenship education, we believe that children need to experience duties and responsibilities that come with being a member of a community in order to help them prepare to play an active role as citizens.

At Upperby we believe that all of the roles of responsibility (Head Boy/Girl, House Captain & Prefect) have very important roles to play in the day to day organisation of our school and as only Year Six pupils are allowed to apply for these positions, it is considered to be very prestigious.  They are, in a sense, junior members of staff and are expected to take their roles seriously.

The positions not only allow the Year Six pupils to lead by example and demonstrate their responsibility, it also enables the younger children to learn from a good example.

Each child is given the opportunity to apply for the jobs that they would like to be considered for and their applications then go through a selection process.  Whilst the Head Boy/Girl and School Council members are chosen democratically by children, the senior staff identify and encourage suitable children to apply for House Captain and Prefect positions.

Once their application has been successful, the roles are announced in a whole school assembly.

All children who have a role must lead by example at all times in their behaviour, the respect they show to others and their school uniform. They take on many roles and have many responsibilities.

The head boy and head girl main role is to support the Headteacher and Senior Leadership Team in promoting and representing the school.  Some duties include: 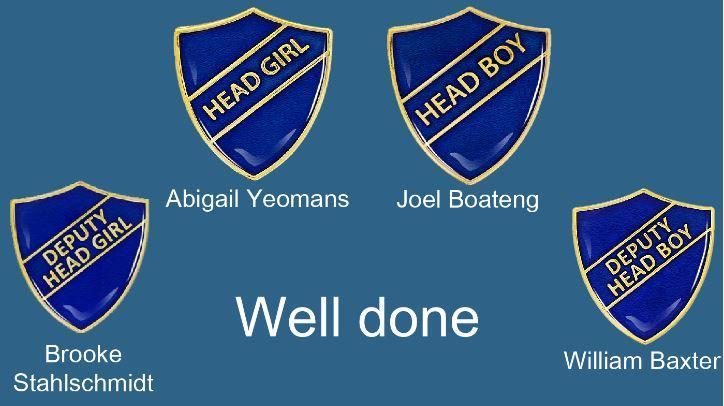 All roles are monitored throughout the year and children will be offered rewards each term if they have carried out their duties well.

Unfortunately not the ones with chocolate chips.

Some cookies are necessary in order to make this website function correctly. These are set by default and whilst you can block or delete them by changing your browser settings, some functionality such as being able to log in to the website will not work if you do this. The necessary cookies set on this website are as follows:

Cookies that are not necessary to make the website work, but which enable additional functionality, can also be set. By default these cookies are disabled, but you can choose to enable them below: